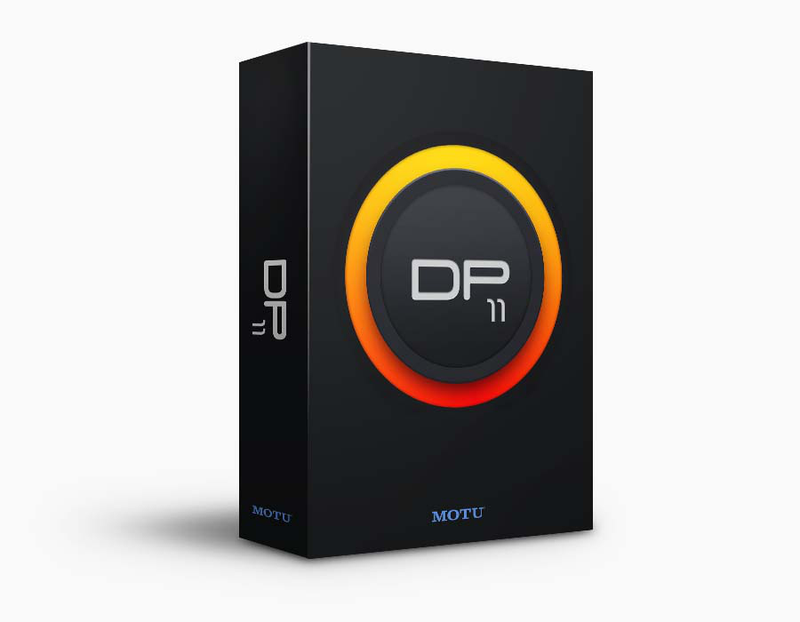 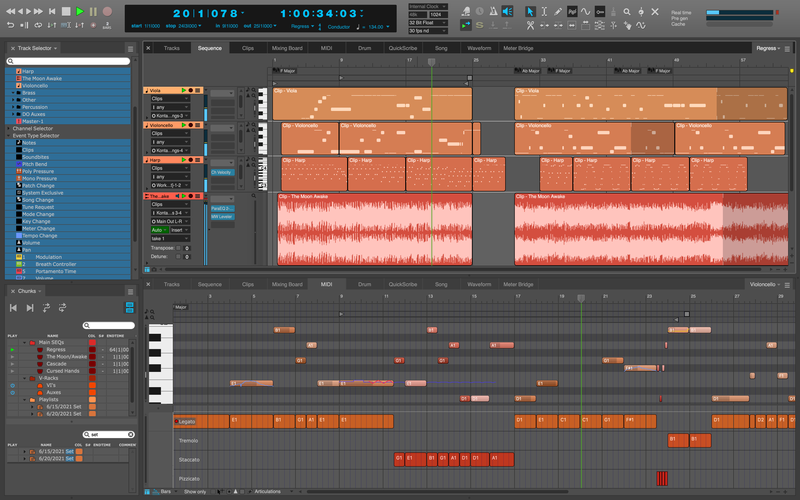 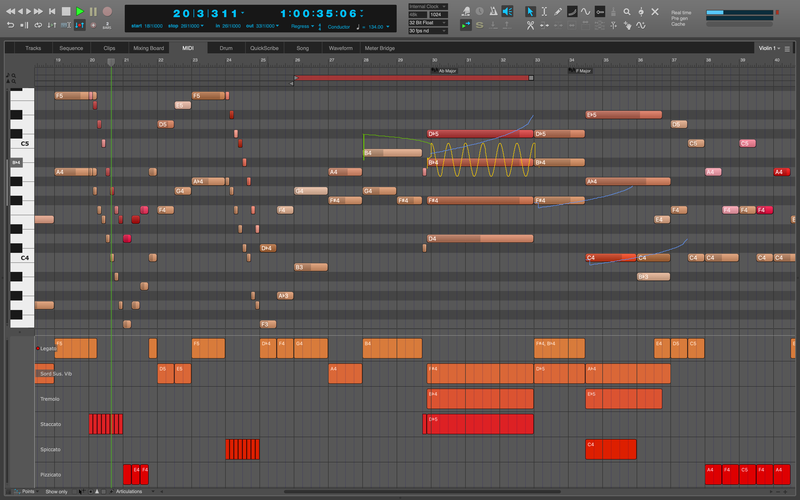 Get inspired, then refine your mix — all in a singular workflow. Digital Performer 11 delivers inspirational features devised to ignite your creative muse, combined with state-of-the-art studio production technologies engineered for the most demanding, world-class recording and production environments.

If you are an owner of a competing audio sequencer product, you can upgrade to DP10 for only $395. If you don't see your competing product on the list, contact MOTU customer service at +1 617.576.2760:

If you are an owner of a competing audio sequencer product, you can upgrade to DP10 for only $395. If you don't see your competing product on the list, contact MOTU customer service at +1 617.576.2760:

NEW in 11.1 — Enhanced Instrument Tracks
Instrument tracks can now hold MIDI data, so everything you need is consolidated into a single track. You no longer need to have a separate MIDI track for the instrument (although you can still do so, if you wish). For multi-timbral VI's, you have two choices: combine multi-channel MIDI streams into the VI's instrument track (see further info below), or break out each part (MIDI channel) into a separate MIDI track, as in previous versions of DP.

NEW in 11.1 — Slurs in QuickScribe
The new Slur Tool makes it easy to add elegant slurs to your scores and parts. Click and drag directly on the slur to reshape it to you exact specifications. Easily drag the endpoints to change which notes the slur is attached to.

Audio Retrospective Record
DP11 adds audio to its Retrospective Recording capabilities. Now, DP always listens to both MIDI and audio input sources, capturing everything, even if you’re not recording. Like magic, you can immediately recall any audio or MIDI material you’ve recently played. For both MIDI and audio input, Digital Performer frees your creativity and ensures you'll never lose that precious, fleeting creative moment.

Clip Triggering With NovationTM and AkaiTM Pad Controllers
Gain complete hands-on control of DP’s extensive Clips window with a pad controller like the NovationTM LaunchpadTM Pro mk3 or AkaiTM APC-40. Trigger individual clips or entire scenes (sections of songs). Apply filter sweeps and other effects processing as you go: Digital Performer is now a powerhouse live performance platform that can take your shows wherever you can imagine.

Chunk Folders and Playlists
DP’s unique Chunks feature allows you to create and manage multiple sequences, songs and V-Racks in a single DP project file, from cues for a movie score to set lists for live shows. In DP11, you can now organize your chunks into folders and playlists. Folders are for perfect for organizing your chunks, while playlists serve perfectly as set lists for your next live show.

Chunks List Split View
Split the chunk list in two sections for improved chunk list management. For example, you could search for a chunk in one list section and then drag it into a folder or playlist in the other. Managing your chunks has never been easier.

Multi-channel MIDI Tracks
You can now record and play multiple channels of MIDI data in a single track. When setting MIDI track input and output assignments, instead of choosing a specific channel, you can choose ‘any.’ When you choose any for input, you can record all 16 MIDI channels into the track at once. The channels are stored with the MIDI events in the track. When you choose ‘any’ in the track's output assignment, the events will be played out on the same channel they were recorded.

Support for MPE and Per-Note CCs
MIDI Polyphonic Expression (MPE) is here! In DP 11, you can record multi-channel output from an MPE controller — such as a RoliTM SeaboardTM — as regular MIDI notes containing MPE expression data. Instead of a slew of note and controller data splayed across dozens of tracks, you see a single stream of normal MIDI notes that each contain their own note-specific controllers, for easy and intuitive editing. Hide and show the contained per-note controller and pitch-change events in DP’s familiar piano roll. Zoom in the note grid for finer detail. Zoom per- note data independently of the notes that contain them. Select a number of notes and simply drag vertically on their per-note data with the new "Scale" tool to increase or reduce the amount of expression.

Enhanced AvidTM EuConTM Support
DP’s EuCon plug-in has been substantially updated, including support for the Avid S6TM console. In addition, you can now use your EuCon worksurface with DP running on Windows 10.

Track and Clip Effects
Every audio track, MIDI track and clip now has a basic transpose setting that you can use to transpose the content of that track or clip by an interval on playback, leaving the original data unaffected. You can conveniently change the setting at any time. MIDI tracks and clips also have a quantize setting, in addition to transpose.

Intelligent Audio Interface Selection
On macOS, if you haven’t yet selected the audio hardware you wish to use with DP, DP finds the best option for you. If you have a MOTU interface, or other professional interface, DP uses it. If not, DP uses whatever input and output devices you have selected in the System Preferences Sound Panel, and will follow your selection there if you change it. Of course, if you do choose an interface from within DP, DP uses it.

Clips Window Enhancements
The new ‘Empty Clips Scene’ command makes a new scene and fills it with new empty clips. The ‘Double Clip Loop’ feature doubles the length of the looped portion in a clip and repeats the material to fill the new loop, so you can easily creates changes that you hear every other time through the looped material.

List Font Scaling
Now you can resize the text in DP’s list windows, independent of the scaling for the rest of the UI. Control three new font size preferences: List, Project Notes and Lyrics.

Dynamically Resizable Channel Strips
DP's faders resize when you make the Mixing Board and Channel Strip windows taller (or shorter).

‘Transpose Exclude’ option
A new track setting (column) in the Track List allows you to exclude tracks from the Transpose region command. There are also new commands to turn it on and off.